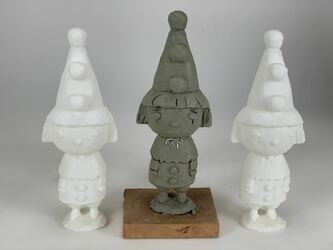 At the point where 3D Technologies have become, various job opportunities have arisen in different sectors by using 3D printers in many parts of the world. In today's world, for people to "create" something, it is enough to have a 3D model of the object they want to create.


As we mentioned in our article What is a 3D model?, 3D models are divided into two due to their structure;
1- 3D models obtained by scanning
2- 3D models obtained by drawing using computer programs
You can explain the last sentence we used in the first paragraph to people who do not want to accept 3D models as virtual entities.🤷🏼‍♂️
It no longer surprises anyone that people and companies interested in 3D drawing have already achieved very important successes in this up-and-coming sector and signed big contracts.
While talking about creating an object from nothing, we can now easily say that the "copying" function of objects by 3D Scanning has been gained by humanity. It is now possible to obtain a copy of a figure, item or object of any size that is not above the printing capacity of 3D printers. By scanning an object in 3D with an application such as 3D ProBox, a virtual copy of that object is obtained. Afterwards, when we print these files in .stl or .obj formats with 3D printers, we have the opportunity to obtain a physical copy of the same object.

If we try to talk about the business areas where 3D Scanning and 3D printers affect our lives, we can count dozens of sectors. In this blog post, we will discuss some of these sectors and examine them together.

What are the using areas of 3D Printers?

3D printers are machines with a "creative" function that should be used in almost every sector, producing parts and equipment faster and less costly than other techniques. Some of the main sectors in the usage areas of 3D printers are;
-Automotive
-Health/Medical
-Engineering
-Architecture
-Education

As we mentioned before, 3D printing technology is a technology that can work in any industry, but we will only consider the featured sectors of 3D printer use.

What 3D printers add to the automotive industry

3D technology, which is frequently used in the automotive industry, has taken a completely different form with the widespread use of 3D printers. While the leading brands of the industry have fully met their needs by using 3D printers, they can minimize costs such as production costs and time to be spent.
Brands such as Honda and Audi save time and money by using 3D printers in the production of products such as spare parts, headlights or remote controls in their vehicles. At the same time, they offer their customers customized products under the "limited edition" campaign.
Divergent Microfactories pioneers the use of 3D printers in the industry as the first company that produces cars with 3D printing. 🏎️


Use of 3D printers in healthcare/medical fields


3D printers are frequently used in the health sector in operations such as fractures, dislocations and prostheses that can be experienced in the human body.In addition, 3D printers were used in the production of respiratory devices and quarantine houses in the fight against Covid-19, which affected the whole world. These houses have a capacity of 10 square meters and at the same time provide accommodation for 2 people in quarantine periods.


Use of 3D printers in the engineering industry

3D printer technology has become an indispensable part of production for engineering and R&D companies over time.At some moments in engineering, there may be parts that are hard to find, cannot be found or they might be really expensive. The production of these parts with 3D printers is provided much faster and cheaper than other techniques or buying these parts. After the deficiencies and errors in the product design process are handled, mass production with 3D printers has become a very useful manufacturing strategy for companies to save time as well as cost.

Use of 3D printers in architecture

3D technology, which has been used for many years in sectors such as construction and architecture, has taken a completely different form with 3D printers. Even before 3D printers are as developed as they are now, while small-sized models are printed by 3D printers by architects, various projects can be done in the architecture and construction industry at the point where 3D printers come.
In addition to saving time and cost, it is also possible to get recyclable prints if organic materials are used in printing.

Use of 3D printers in the education sector

3D printers are very important for universities, high schools and primary education. In addition to the use of 3D printers in the lessons taught in schools, 3D printers are frequently used in the production of auxiliary equipment of preschool education sets.
With the use of 3D printers in the education sector, it is now possible for students of all ages and interests to have self-designed robots. Objects that are in the hands of a student and should be in the hands of other students can be printed from a 3D printer by 3D scanning or 3D modeling, very quickly and simply.

In this way, we can see that 3D printer technology has numerous benefits, from its contribution to visual intelligence in education to helping to eliminate class differences in public areas such as schools.
It may be necessary to spend a lot of effort to make 3D modeling on the computer, but if you are a good 3D designer or work with a good 3D designer, you can have most of the objects you want through 3D printers.
If you want to copy existing objects, you can make one-to-one scans with 3D ProBox, and after your scans, you can print the3D model that you have downloaded in .obj format from a 3D printer and have these copies.