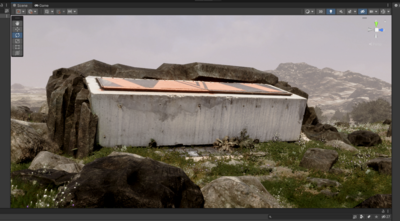 Use of 3D models created with 3D ProBox in Unity

👾 3D modeling is the process of creating a digital representation of any physical object that exists in the real world. It is the most basic and important step of the 3D computer graphics development process. At the same time, 3D models are the backbone of game development. They are used for purposes such as making game art, animations, characters and props.

🎮 When it comes to 3D modeling, Unity and Unreal Engine are among the most popular game engines in the world. It is mostly used by individual developers as it offers a powerful toolset for creating games and other interactive media visuals.
Unity; is based on 3D models created with various third-party software such as Cinema4D,  Blender or ZBrush and is a game engine used to create games for all platforms. Unreal Engine is another game engine used to create games for PC, Mac and consoles. The process of creating 3D models in these game engines requires a lot of time and effort from a user. Therefore, this is one of the places where 3D scanning technology is most widely used.
It is possible to obtain a 3D model, which is needed in a virtual environment, by 3D scanning much faster and simpler than creating it by drawing.


🕹 3D Models are divided into two as 3D scanning and 3D drawing models. 3D scanning  can be done by photogrammetry or laser scanning method. Photogrammetry involves taking pictures of an object from different angles and then combining them into a 3D model. Laser scanning is the process of scanning with laser-assisted devices to create a digital three-dimensional model of any object. A laser beam is sent on the surfaces of the object to be scanned, without using a reflector, to collect the three-dimensional data. For detailed information about 3D Models, you can read our blog post "What is 3D Model".


In this section we will explore how a 3D model created with 3D ProBox can be used in the Unity game engine.


🎯 3D models are a great way to create interactive and immersive content for your games. You can buy 3D models from many virtual stores such as the Unreal Engine Marketplace or other 3D modeling websites and use these 3D models in the Unity game engine.

Use of 3D Models in Unity game engine


To use a 3D model in Unity, you must first import it into your project. To do this;
Step #1: Download the 3D model file you created with 3D ProBox in obj format and the texture file of the same 3D model.

Step #2: Examine the files in the “downloads” folder and extract the Winrar files.

Step#3: Create a new project in Unity. The start scene is created automatically.

Step#4: Drag and drop the obj and texture files you downloaded to the bottom left panel inside the Unity editor.

Step#5: Click once on your 3D Model and click the "Extract Materials" button inside the materials layer.

Step #6: The textures will appear on the bottom panel. Drag and drop your texture file with the same name as the Material to the "BaseMap" (Albedo) just below the "Main Maps" section.

Step#8: Increase the size and quality of texture files.

Step#9: Drag and drop your 3D model onto the stage.